Back in May 2016, Nicholas Bostock had been working out with weights but wanted to really explore what his body could do. He decided to give body-building a shot and made it a goal to enter the 2017 ICOMPETE Rookie and Rising Star competition on 5th March in Melbourne.

In this type of competition all of the work is done before the event itself, although there is some application of technique involved on the day.

Nicholas shares with us here his competition diary: 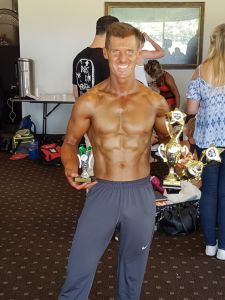 I’d had my first-ever spray tan, transforming my alabaster complexion from vampire to sexy. I arrived at the airport with Mandy, also competing, and three other beautiful friends, only to be told our flight had been delayed.

I still had two litres of water to drink, (out of the 10 litres for the day) which is harder than it sounds.

I’d been asked a lot lately if I was hungry. To be honest, the food side of things was pretty easy. The hardest part of my prep had been the water loading. Basically you start with a reasonable daily intake of water and gradually increase – in my case 6 litres Monday to 7, 8, 9 and 10 by Friday. This process is all about manipulating water retention in your muscles to help the details of the muscles to be seen beneath the skin.

We arrived in Melbourne and checked into our accommodation. I finally managed to drink the last few drops of my prescribed water. If that was the worst part of “comp prep” then yahoo because it was done! 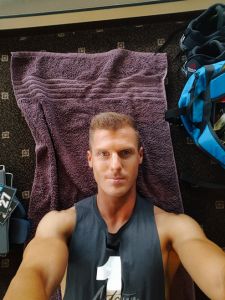 I woke up at 4 a.m. feeling well rested and ready to explore Melbourne. Did I mention that I LOVE the city of Melbourne?

I consulted Google and saw that the nearest supermarket didn’t open until 6 a.m.

At 4:30 a.m. I got some cardio in and walked a couple of kilometres to the nearest 7-11 to buy some lollies (yes you read that correctly) for my simple carbohydrate diet on the next morning – competition day!

As you can imagine I wasn’t the only restless traveller in the group. When I got back, Aimee and Amy had scouted out the nearest ZAP gym and were ready to go. Now I’m not going to lay blame but… a short walk turned into 55 minutes to reach ZAP! I did some easy bodyweight exercises to pump up a little and then settled into practising my posing for tomorrow while the Amys/Aimees did their usual workout.

Bodybuilding posing looks hilarious out of context. I practised my posing for about 10 minutes before the smirks and giggles from the other dedicated Saturday morning gym rats got to me.

Right next to ZAP, there was a supermarket so I went and bought my food for the day. The menu consisted of starchy carbohydrates: potato, potato, potato.

Mandy and I were getting our second last spray tan that afternoon. Tara (the tanning expert) was competing also and she had some good tips about the competition.

After my tan had dried a little, we walked to the nearest supermarket and I bought a chocolate mud cake for after the competition, I was quite disappointed they didn’t have a mint chocolate cake but… Mandy then told me she had two whole blocks of Oreo Mint Chocolate to share.

I had noticed increased my irritability and irrationality since around 2 p.m., but did not feel dehydrated.

Part of the nutrition plan in the morning involved very small doses of simple carbs. READ CAREFULLY… my coach Priscus said that translated to either a small amount of honey – or LOLLIES. Now in all seriousness who the hell is going to choose honey over lollies?! I planned to enjoy eyeballing the various other hungry competitors who are  competing in my division as I slowly chew my gummy bears.

I perceived the ensuing contest would be like Federer vs Djokovik, except the bodybuilding trophies are way taller than in tennis. This may or may not be relevant to the fact that I was in the ‘short’ category. I had Stephen Fry reading the Complete Sherlock Holmes on audiobook which I hoped would help me fall asleep fast.

I felt pretty relaxed and ate some boiled potato and a few gummy bears – so much better than it sounds! By 8:30 a.m.  I had triple-checked my bag was packed with everything for the day. Of course the others were still all getting ready!

All checked in and I had made a comfy spot with my ‘tan towel’ and a pillow to lie down on in the back stage area. Time to settle in for a couple of hours.

The girls had arrived and were in the process of putting Mandy’s face on. I have just reminded Amy and Millie that I offered them SOME of my gummy bears NOT the rest of the packet!

Just got my Fitness shorts from the Black & Blue stand, relieved that they are small enough and actually fit my waist line (currently boys size 16).

Last layer of tan is on PLUS oil.Yes they literally rubbed oil all over my body…

ANYWAY! Time to pump up before we are called to stage. Still not nervous.

My goal going into this competition was simple, to have fun on stage regardless of whether I placed. I had expected to get nervous when they called us to the side of the stage. But I felt nothing but excitement. They lined us all up in height order, shortest to tallest, and needless to say I was second in line.

I had so much fun on stage! The posing felt so natural and I was having such a good time that I didn’t need to force a smile, it simply came of its own accord.

When they announced the fifth place getter I thought “well… I had so much fun it doesn’t matter that I didn’t place’.

Then my name was called for fourth place. I truthfully could not believe it.

So many thoughts went through my head. In that moment I remembered back to May of the previous year when Priscus asked me to take off my shirt so he could assess my physique. I know now he was seeing not how I looked then but what he could sculpt me into. 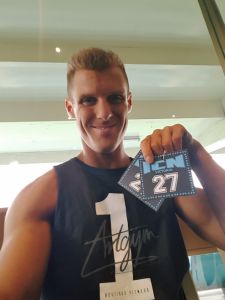 This whole journey would not have begun without the encouragement of a dear friend. I won’t embarrass anybody by naming them, but when I stood on the podium holding my not-so-small trophy, I thought about how their encouragement had changed me.

The echoes of encouragement have carried me to this moment. So far this day has been filled with the giving and receiving of encouragement. There are 498 people competing here today. I hope they have enjoyed it as much as I have so far.

Did I mentioned the donut stand at the venue? That is where I went next. I enjoyed that donut a lot. Tanning lotion and oil mixed with sticky donut icing actually tasted pretty amazing.

After a fresh layer of oil and three shots of vodka, it was time to go back on stage for the open class. Once again I placed fourth. This despite the donut and vodka!

Another donut and almost the rest of the vodka later (a small bottle I swear!), I raced over to my belongings and changed into my outfit for the Physique division. Covered in even more oil I lined up with the other competitors. There were some familiar faces but the physique category is not really suited to a fitness model body, though this didn’t matter because I was there to have a good time.

The compulsory poses for physique are WAY more fun than in the fitness model. You get to strike a front and rear double bicep, side chest, side tricep and an abs pose – just like a real bodybuilder! The competition was strong and there were some excellent specimens on that stage but I didn’t feel out of place and my posing was on point. 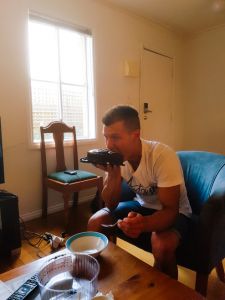 I could tell you about the KFC nuggets, chocolate and tequila that followed that day but I’d much rather take the time to address a far more important topic!

In no particular order I want to thank Mandy and Aimee for their friendship, encouragement and support, Eilish and Miskad for providing me with the most amazing place to train, Joey for my abs, Johanna for her never-ending patience regarding tanning and just about everything you can imagine. And Priscus for getting me into shape!

My next competition is in Hobart, Tasmania on the 23rd of April, and I hope to see some of you there!