We take some flak for being “Artgym”.

When we first opened a friend of a friend said she liked ‘to keep her art and her gym separate.’

There’s a tendency to compartmentalise, restricting parts of our lives into neat and tidy boxes, gym between 3 and 4pm and creativity in the morning. But, inevitably, all the aspects of our life and thoughts, and who we are, are intertwined. Especially, our health, our physicality, and our creativity are intertwined. The myth being that gym people are ‘thick-necked and thick-headed’ and artists are skinny and moody.

In the 90s, when I was at art school, the lecturer would tell us all to go and have a coffee and cigarette break. I loved cigarette and coffee breaks. But, in effect, I never seemed to get a whole lot done in between them. I worried about people seeing my work and about why it didn’t mean anything. I walked but I smoked while I walked. It took one cigarette to get from the tram stop to the national gallery and so on. I was, exponentially, anxious.

Buying a gym membership felt like an ultimate act of rebellion. I kept it a secret for a while. But I found the gym worked for me. I had more energy, I could sit still for longer to paint. I didn’t feel trapped in my own head.

Writer Haruki Murakami also used to smoke a lot of cigarettes – he ran a jazz club in Tokyo called “Peter Cat” in his 20s. In a radical change, he later took up long-distance running. In an interview on “Speigel Online”, Murakami described why he did this: ‘I wanted to lose weight. During my first years as an author I smoked a lot, about 60 cigarettes a day, in order to be able to concentrate better. I had yellow teeth, yellow fingernails. When I decided to stop smoking, at the age of 33, I sprouted rolls of fat on my hips. So I ran, for running seemed to me to be most practicable.’ 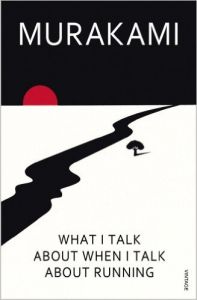 One time, when I was preparing for an exhibition in Melbourne, in order to work ALL OF THE HOURS I drank so much Pepsi Max that my hair started falling out and the skin on my face peeled.

I came to wish I had a kettlebell under that table laden with coloured markers and paper and watercolours so that I could have done a set of swings every few hours.

I can understand why no artist, not a 20-year-old “Peter Cat Jazz Club” owner, wants to travel with a gym members plastic key. It’s just not the same as a box of Lucky Strikes.

But there are other ways.

I love Bob Dylan. I totally think he deserves the Nobel Prize. So it’s cool that Bob Dylan – the ultimate weedy, poetic artist, a somewhat effeminate man – is a boxer. He even dabbled in Kung Fu for a period of time.

These things are not incongruent. Boxing and poetry; marathon running and writing novels.

Find a gym where you can feel like you, still you, when you step through the door. Where you don’t have to pretend to be someone you are not. Find instructors who speak a language that you are familiar with.

Choose exercises that make you feel more powerful, stronger, more alive, more fully you. For me, I like boxing, weight training, kettlebell lifting.

Don’t be locked in. Don’t be afraid to mix things up. Rebel.